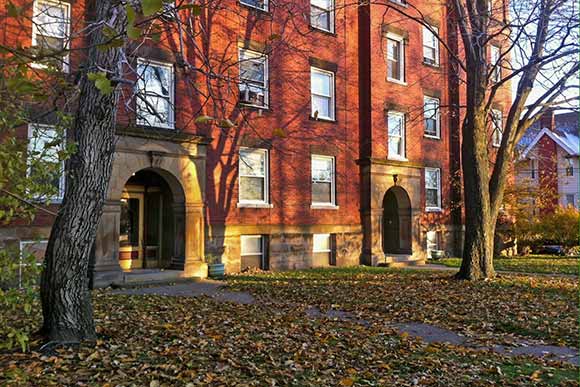 A New York based developer has taken note of the renaissance illuminating the 216 and has decided to get in on the action on both the east and west sides of town.

“We’re not in Cleveland by accident,” says Smith, who has been in development for 25 years. “We’re only in markets that we feel are exploding.”

CPR purchased Canterbury House for $475,000 in 2013 and subsequently sunk $300,000 into renovations. The 20,000-square-foot building houses studio apartments and one-bedrooms with approximate square footages ranging between 400 and 650, and rents from $575 to $675. Currently, the building is at 50 percent capacity with eight units available to lease, which Smith believes will be filled by spring or early summer. He hopes to attract mostly eclectic “characters,” which he defines as working people who are interesting.

He hopes to nurture his investment and help bolster the entire community: “Our work over the years has showed us that when you renovate a building and bring in good people you increase the desirability of the neighborhood. In turn, they make your property more desirable and the value of the building goes up.”

Canterbury House also has two vacant retail spots, both of which are approximately 800-square-feet. Smith hopes to attract start up businesses to fill the spaces by offering them at “a very low price.” To that end, he’s been in contact with Cleveland Heights Economic Development Department.

Renovations for The Edison on the other side of town have not yet begun, but are slated to commence as early as next month or March. CPR paid $400,000 for the 28,000-square-foot building, which houses 35 units and is at 50 percent capacity.

Of the evocative names, says Smith, “Part of what we do is brand buildings to create a unified image. It helps to create a sense of place.” In keeping with that concept, CPR’s vision for The Edison is sure to attract a certain demographic.

“We’re going to refashion the apartments in sort of a steampunk style,” says Smith.

Both projects are a perfect fit for CPR.

“We’re always looking for good deals in parts of town where we can take things that are outliers and make them really nice so we can attract good people. Slowly by degrees, that’s how places get better,” says Smith. “You won’t find a single building in our portfolio that isn’t a beautiful historic building. Part of our passion is preserving things for generations to come.”

Above all, however, he credits people for recreating places.

“Those tenants that come in are the greatest asset to any neighborhood revival,” says Smith. “They become an ambassador, to the area and the businesses.”