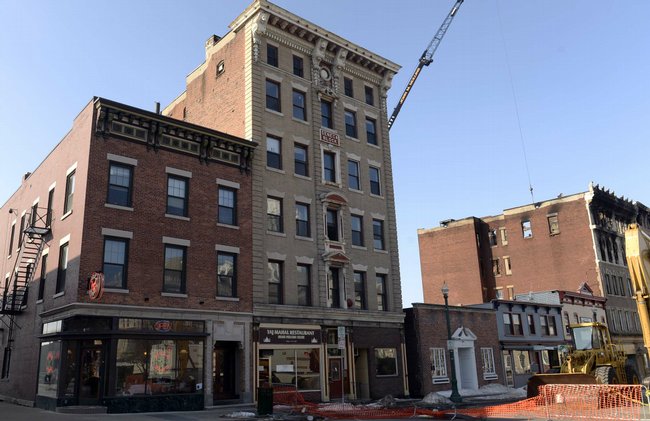 SCHENECTADY — The stretch of Jay Street across from City Hall has seen better days.

A fatal fire in March tore through the Gleason Building at 104 Jay St. and the building next door at 100-102 Jay St., and the resulting demolition left a gaping hole in the streetscape.

A more prominent building on that block — the Seneca Building at 118-120 Jay St. — showed the effect of years of neglect. But now the more-than 100-year-old property is being restored to its former glory.

The five-story Seneca Building was the tallest structure in the city in 1915. It used to be known as The Seneca Hotel, featuring 47 upscale rooms with lodging at 75 cents a day or $3 a week.

More recently it served as an apartment building, with the Taj Mahal restaurant on the first floor. But the apartment units were vacated and the restaurant moved to Clinton Street.

Noah Smith of CPR Property Group in Queens purchased the property in July 2014 and has gutted it to make way for 16 one-bedroom apartments with a rooftop deck, and 2,500 square feet of commercial space on the ground floor.

CPR specializes in preservation projects, purchasing old and historic buildings and revitalizing them in cities like Cleveland, New York City and, for the first time, Schenectady.

“We are preservationists,” Smith said. “All of our buildings are historical in character and nature. We would like to preserve these buildings for future generations.”

While Smith said the building was being advertised online “at a very high price,” he was able to negotiate it down to $160,000. The condition of the building was very poor at first look, he said.

“There was a woman that owned it and was basically running it as a very low-end residential location,” Smith said. “There were bed bugs in there and cockroaches. It was crawling with vermin and bed bugs. People left all of their things there. There were still pots on the stove.”

Smith said he decided to purchase the building after seeing the city for the first time and realizing a lot of investment was underway downtown, with new buildings and new businesses.

“We saw a lot of revitalization and action,” he said. “That’s where we want to be. Seeing downtown Schenectady coming back, we want to be a part of that. If something else popped up we would love to buy it.”

The apartments will be ready by spring, summer at the latest. Each floor will have two large and two small one-bedroom units. Front apartments are about 800 square feet with a large living room and bedroom, Smith said.

Smaller apartments will be about $750 a month, with larger units up to $850. He said he is looking to attract young, working-class people. Plans also include renovating the lobby and adding a rooftop deck for tenants.

“We kept a lot of the historical details that we could,” Smith said, noting that the old hotel doors were discovered buried in the walls during the renovation. “The bathtubs are magnificent porcelain, so we kept those. The central staircase will be restored and is in pretty good shape. It will be a fully modern up-to-date building.”

On the ground floor, Smith is looking to have a restaurant and retail space. He said a high-end steakhouse has already expressed interest in the property.

“We really want to make sure we get a good commercial tenant there,” he said. “If we get a good destination restaurant and a strong retail tenant, people will come from State Street and walk to our building. A good tenant will also help to revitalize that area.”

The building has already been upgraded with new electric, gas and plumbing.

A local management company yet to be selected will oversee the building, Smith said.

The outside of the Seneca Building will be refreshed and remain mostly the same. Bricks will be replaced and rust removed. Smith is seeking a facade grant from the Schenectady County Metroplex Development Authority.

“They have presented a concept to us and we haven’t finalized an agreement with them on the facade yet,” Metroplex Chairman Ray Gillen said. “It’s an important location. We like the fact that it’s being thoroughly renovated in a key location.”

Smith said the city’s Building Department has been “very tough” since the Jay Street fire nine months ago. The Seneca Building has a new sprinkler system and fire alarm system, he said.

“They have been making us go above and beyond,” he said. “We have full sprinklers and fire alarms. We will also have an intercom system, which is pretty standard.”

Smith said he believes demand for apartments and commercial space will be high with a casino coming about a mile away off of Erie Boulevard. He said the Greenmarket is also a great offering on Jay Street during the warmer months.

Smith said he is traveling back and forth from his home on Long Island as work is ongoing at the Seneca Building. He said CPR does all of its own construction to make sure the job is done right.

“The architectural elements will get repaired, a lot of them are rusty and will get rustproofed,” he said. “We have a nice color scheme that will enhance the overall building. It will take what’s now a gorgeous building to the next level.”