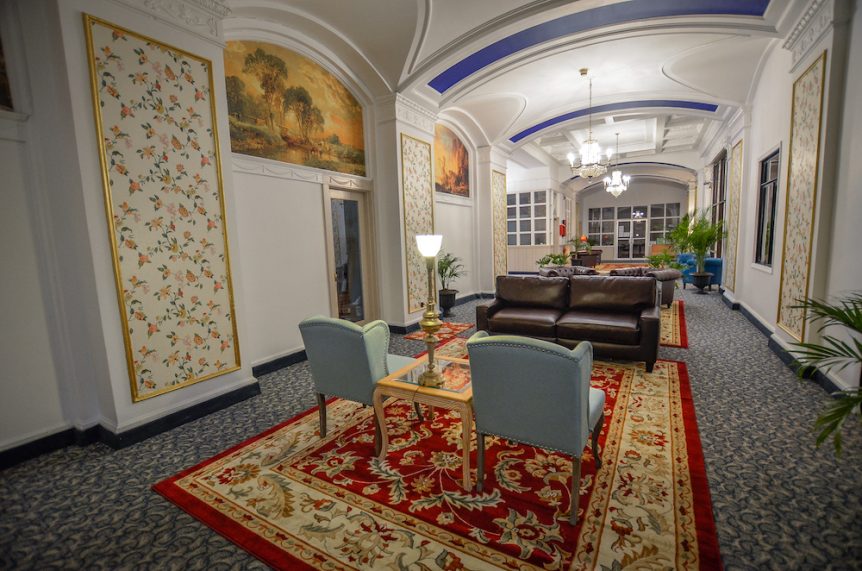 Pass through the glass doors and look up at the detailed and elegant ceiling and stunning chandelier. Then look around at the well-appointed furnishings and decor. You’re standing inside the beautiful lobby of a historic building that’s in the heart of downtown New Castle.

The Majestic, as it is now known, was originally the Castleton Hotel and then became Castle Arms Motor Hotel.

There has been another renovation to the apartments and in a word, it is majestic.

Let’s start with the lobby. Not many apartment buildings can boast of such an impressive space but we must not forget this was once a hotel and when it was built in 1927, grand lobbies were all the rage.

Michele Goodman-Jones manages the building, which is owned by CPR Property Management. 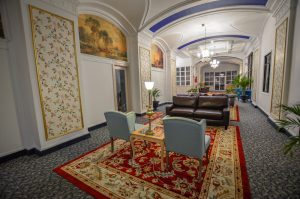 Michele told me that Ted Haber of the company approached her about the position because she had a business, Michele Goodman Studio, in the building.

Michele Goodman-Jones, who manages The Majestic, made the lobby an inviting space. The Majestic was once a hotel in downtown New Castle, but in recent years has been transformed into apartments.

With Michele’s style and good taste, it’s no wonder the extra touches that complement the sofas and coffee tables make this lobby so inviting. 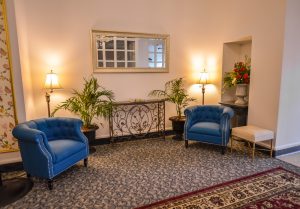 Not only is it a pretty area, it’s a great gathering spot, particularly in the morning when some residents come downstairs to read the morning newspaper.

The piece de resistance — in this case there are several — are the murals and wallpaper, especially the design of one that resembles the grand lobby.

The building on the corner of East Falls and North Mercer streets was conceived of as an upscale hotel by influential businessmen in the community. It was meant to be a stopover for travelers passing between the East Coast and Chicago as a central meeting site for the various clubs and organizations of the area. It fit in nicely with the opening of the Scottish Rite Cathedral.

Local architects W. G. Eckles and A. L. Thayer designed the six-story structure with the assistance of the Philadelphia firm of Thomas, Martin and Kirkpatrick. 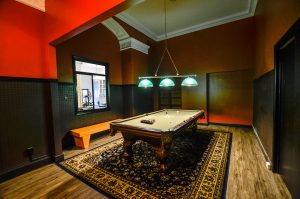 The Castleton was considered to be the finest hotel in New Castle and had some famous guests over the years including Amelia Earhart Putnam and baseball legend Lou Gehrig.

It has been used as the motor lodge, apartments for senior citizens and overnight accommodations for CSX railroad employees, and it changed owners several times in the 1980s.

Businesses located there were a beauty shop, barber shop, drug store, dress shop, jewelry store and a collector’s shop. Those are long gone.

But, ground floor commercial space is available, according to Ted. 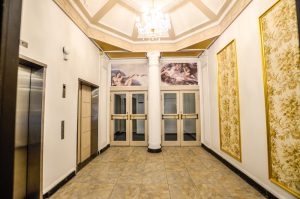 Today, in addition to the about 60 — mostly one-bedroom, with a few two-bedroom — apartments that are absolutely lovely, there is a community room used for activities like bingo, Steelers and movie nights, a ping-pong room and a billiards room, which Michele said is used constantly.

“It is beautiful,” she noted of the high-end pool table.

In a sense, all of these add up to building a sense of community in which apartment dwellers can get to know one another. Another bonus is that people of all ages live here. Two female occupants are both more than 100 years old.

Ten years ago, this part of the block had seen better days.

“The building is alive now,” she said, adding the sixth-floor apartments were available starting in September. The sixth floor had been empty for more than 20 years except for the Lawrence Club.

Ted and his business partner, Noah Smith, saw the potential. 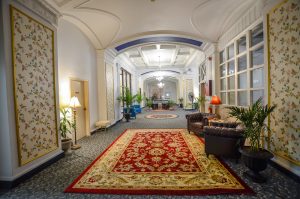 The pair bought 12 buildings in Cincinnati and renovated them so generally they gravitate toward trendy urban environments.

But, “this is an extraordinary building,” Ted commented by phone. “People who have lived in a place all their lives sometimes don’t see the potential.”

He added that’s it’s a good value for many people and “a good fit for us.”

Ted would love to use the former Lawrence Club as a “classy club space” to rent out for events.

From bottom to top, this building is seeing a total transformation. As people move out, apartments continually get renovated.

With video surveillance, it’s a safe and sound environment, too. 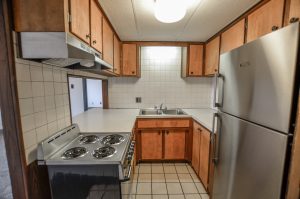 And the view from the top is incredible. Looking out one window, I could see several churches and other parts of the city.

Michele said, “I love my job because I’m also activities director, a position I had before I became the manager. This job complements everything else I’ve done in my life. It’s come full circle.”

She also uses her talents to decorate all the windows “so they look more attractive.”

This building was able to reinvent itself as The Majestic.

It certainly lives up to the name. 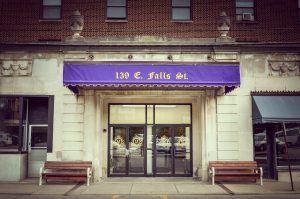